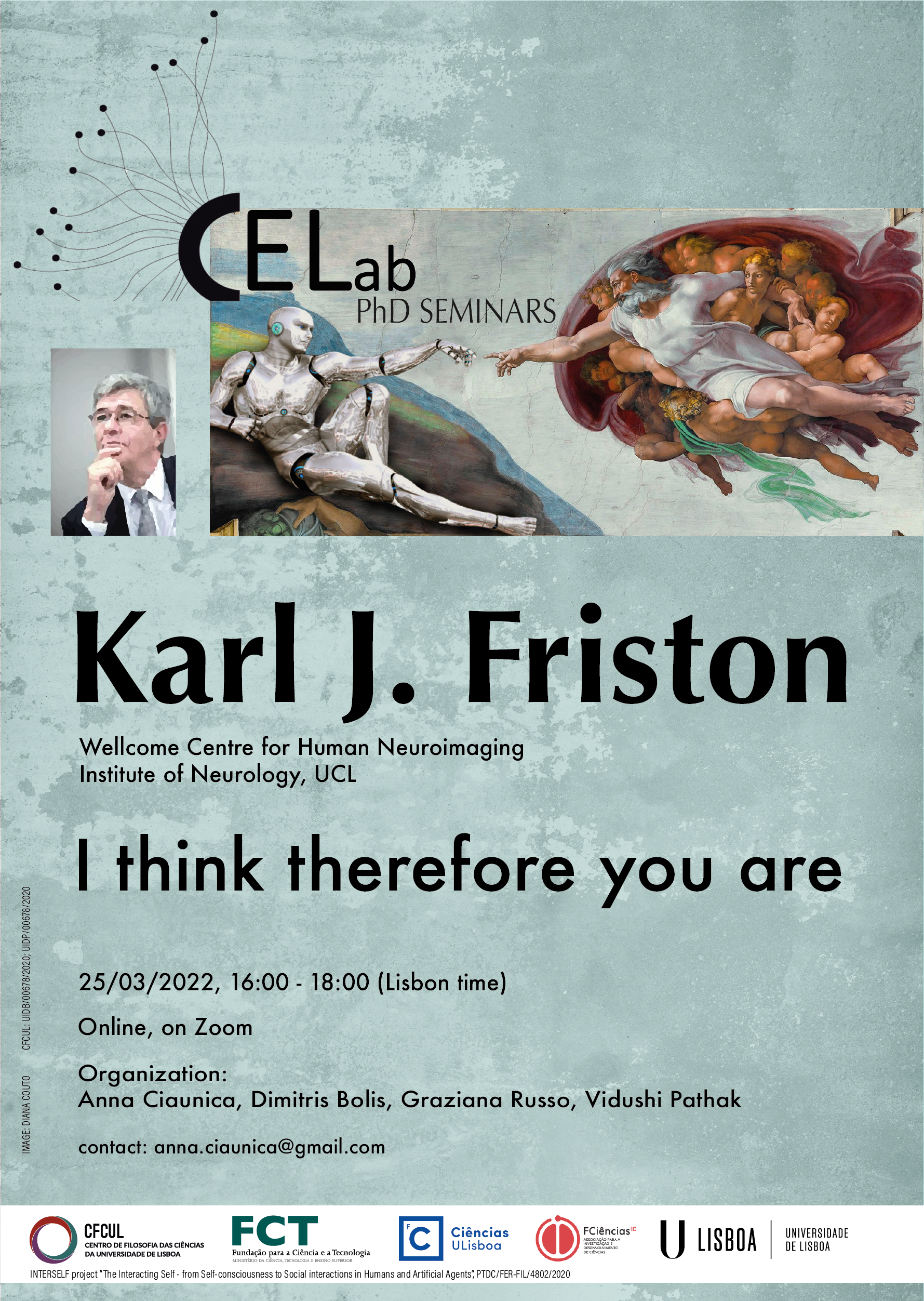 Abstract
This overview of the free energy principle offers an account of embodied exchange with the world that associates neuronal operations with actively inferring the causes of our sensations. Its agenda is to link formal (mathematical) descriptions of dynamical systems to a description of perception in terms of beliefs and goals. The argument has two parts: the first calls on the lawful dynamics of any (weakly mixing) ergodic system – from a single cell organism to a human brain. These lawful dynamics suggest that (internal) states can be interpreted as modelling or predicting the (external) causes of sensory fluctuations. In other words, if a system exists, its internal states must encode probabilistic beliefs about external states.
Heuristically, this means that if I exist (am) then I must have beliefs (think). The second part of the argument is that the only tenable beliefs I can entertain about myself are that I exist. This may seem rather obvious; however, it transpires that this is equivalent to believing that the world – and the way it is sampled – will resolve uncertainty about the causes of sensations. We will consider the implications for functional anatomy, in terms of predictive coding and hierarchical architectures, and conclude by looking at the epistemic behaviour that emerges – using simulations of active inference and communication.

Nota biográfica
Karl Friston is a theoretical neuroscientist and authority on brain imaging. He invented statistical parametric mapping (SPM), voxel-based morphometry (VBM) and dynamic causal modelling (DCM). These contributions were motivated by schizophrenia research and theoretical studies of value-learning, formulated as the dysconnection hypothesis of schizophrenia. Mathematical contributions include variational Laplacian procedures and generalized filtering for hierarchical Bayesian model inversion. Friston currently works on models of functional integration in the human brain and the principles that underlie neuronal interactions. His main contribution to theoretical neurobiology is a free-energy principle for action and perception (active inference). Friston received the first Young Investigators Award in Human Brain Mapping (1996) and was elected a Fellow of the Academy of Medical Sciences (1999). In 2000 he was President of the international Organization of Human Brain Mapping. In 2003 he was awarded the Minerva Golden Brain Award and was elected a Fellow of the Royal Society in 2006. In 2008 he received a Medal, College de France and an Honorary Doctorate from the University of York in 2011. He became of Fellow of the Royal Society of Biology in 2012, received the Weldon Memorial prize and Medal in 2013 for contributions to mathematical biology and was elected as a member of EMBO (excellence in the life sciences) in 2014 and the Academia Europaea in (2015). He was the 2016 recipient of the Charles Branch Award for unparalleled breakthroughs in Brain Research and the Glass Brain Award, a lifetime achievement award in the field of human brain mapping. He holds Honorary Doctorates from the University of Zurich and Radboud University.