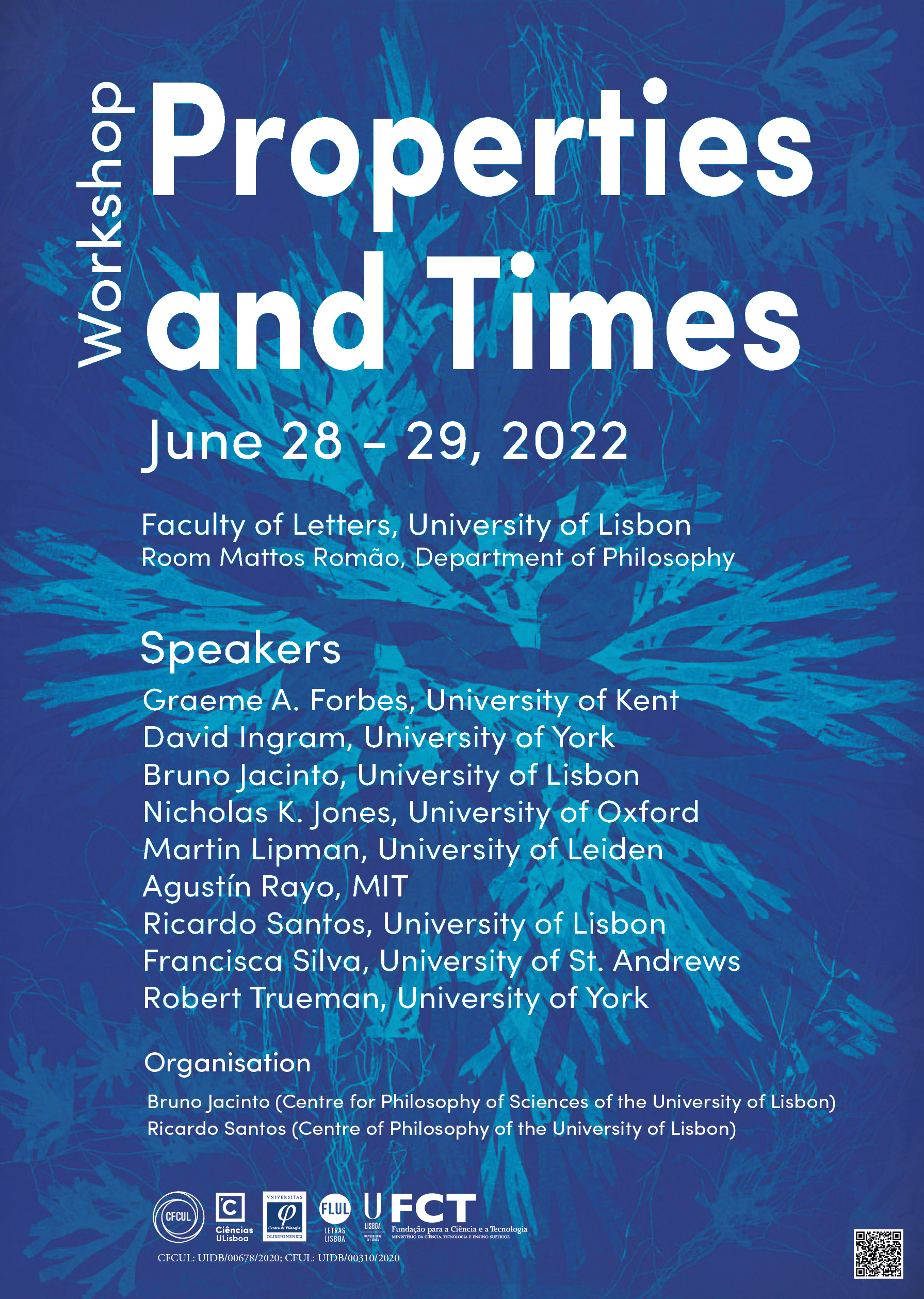 The “Properties and Times” workshop brings together state of the art research on the topics of properties and times, and aims to promote future work on their intersection. Among the questions dealt with are the following:

Graeme A. Forbes: “Instantiating the past”
Haecceitist Presentism agrees with defenders of the Growing-Block view that many sentences about the past are true, and allow us to have singular thought about past entities. They disagree over what makes such sentences true. The Growing-Block (as defended by Forrest (2004) and Forbes (2016)) is committed to causally-inert events located in the past that make such sentences true, whereas Haecceitist approaches, as defended by Adams (1986); Mason (2006); Ingram (2016; 2018) appeal to uninstantiated properties. Drawing on Seargeant (1985)’s approach, according to which properties are ways things are, I argue that there can be no actual ways things are without the existence of some things which are that way. To have an haecceity without the existence of something that the haecceity is of is like the Cheshire cat having a grin without a face. I will consider the responses that because the relevant things used to exist, and because the Growing-Block relies on the past differing modally from when it was present, the Cheshire cat objection lacks teeth. I will argue that the disagreement revolves around the relation between substances, properties, and actuality, rather than a difference in how change is understood.

David Ingram: “How to Build a (Dynamic) Theory of Time”
Some theories in the philosophy of time are described as ‘dynamic’ theories and, moreover, these (so-called) ‘dynamic’ theories of time are often motivated by the fact that they are dynamic (as opposed to ‘static’). However, it is not clear what it is exactly for a theory of time to be dynamic. In this paper, I offer an opinionated introduction to the project of theory construction in the philosophy of time and I outline some salient respects in which a theory can be described accurately as more or less dynamic than another theory. In doing so, I show that dynamism is multifaceted and admits of degrees. Further, when surveying some of the main options in the theoretical landscape, I suggest that the most dynamic theory on offer is not completely dynamic and I raise a question about whether we can do better.

Bruno Jacinto: “Cumulativity and Absolute Generality”
Krämer (2017) and Button and Trueman (Forthcoming) have argued that cumulative type theories are inconsistent with the existence of absolutely unrestricted domains of quantification. If their arguments are sound, then cumulative type theories’ expressive and deductive power is unavailable to generality absolutists. Starting with the construction of an independently motivated cumulative type-theoretic language with a complex-predicate forming operator, I show that, from the standpoint of typical higher-orderists, those arguments either: i) do not factor in the view that universal quantifiers of type-theoretic languages are sui generis rather than species of a single genus; ii) fail to appreciate the implications of variable-binding vis-à-vis the type of the properties that quantifiers apply to. I then argue that the best higher-orderist precisifications of the claims “there are unrestricted domains” and “everything is an entity” are theorems of attractive cumulative type theories.

Martin Lipman: “Time, standpoints and immersive thought”
Does the world correspond to what it is like from the standpoint of a particular moment in time, or does it rather correspond to some overarching atemporal standpoint? I have come to believe that this is a false choice. The world harbors both temporal and atemporal standpoints, and comprises what things are like from each of these standpoints. In this talk, I motivate this approach and discuss a non-standard general framework that helps us make sense of it. The framework consists of metaphysical and logical principles, as well as an account of what it is to adopt an (a)temporal standpoint in our representation of things.

Agustín Rayo: “Why I’m not an Absolutist”
I consider certain limitations of Absolutism — the view that there is sense to be made of absolutely general quantification — and sketch an alternative proposal.

Ricardo Santos & Francisca Silva: “Critical reflections on sentences that tomorrow will have been true one day earlier”
Presentists and non-futurist Ockhamists have been faced with the objection that they cannot provide adequate grounds for contingent truths about the past and the future as they do not have in their ontologies merely past and merely future entities, respectively. A reaction to this objection that has been gaining traction in the literature is to weaken and tense the grounding requirement. According to this weakening, present truths about past events do not presently have a truthmaker but had a truthmaker, and likewise present truths about future happenings do not have a truthmaker but will have a truthmaker. We start by presenting a robust version of this strategy developed recently by Correia and Rosenkranz (2018, 2022). We then formulate two objections to the view: that it relies on the availability of Lucretian semantic properties and that it asks the truth-value links to do metaphysical work that is too heavy for them. Finally, we move on to consider that such a strategy, if one were to apply it to modal truths, would lead to results that do not do justice to any serious grounding requirement.

Organisation
Jointly organized by the Center of Philosophy (CFUL) and the Center for Philosophy of Sciences (CFCUL), University of Lisbon
Bruno Jacinto (CFCUL)
Ricardo Santos (CFUL)