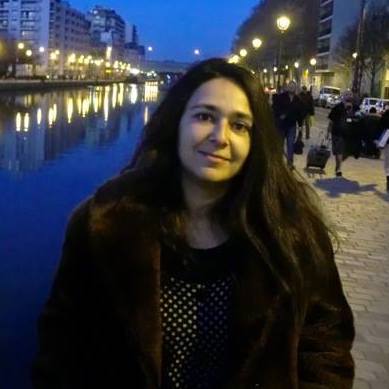 Catarina Pombo Nabais is currently Researcher at the Department of History and Philosophy of Science of the Faculty of Sciences of the University of Lisbon. She graduated in Philosophy – variant in Philosophy of Science – by the Faculty of Letters of Lisbon University (1998), she obtained her Diplôme d’Études Approfondies in Philosophy at the University of Amiens, France (1999), and concluded her PhD in Contemporary Philosophy by the University of Paris VIII, under the supervision of Jacques Rancière (2007) with the highest distinction for a PhD dissertation in France. In 2013, she published her first book untitled Gilles Deleuze: Philosophie et Littérature, by L’Harmattan, Paris. From 2007 to May 2019, she was a Post-Doctoral fellow with 3 successive grants awarded by the Portuguese Foundation for Science and Technology (FCT) at the Center for Philosophy of Science of the University of Lisbon (CFCUL) of which she is integrated member since 2006. From 2007 to 2014 she was head of the research group (RG) “Science and Art”. In 2014 she created the Science-Art-Philosophy Lab (SAP Lab) of which she is the coordinator since then. She is currently the vice-head of the research group (RG3) “Philosophy of Technology, Human Sciences, Art and Society”. In line of her research activity in Science and Art domain, she belongs to faculty of the International Doctoral Program “Philosophy of Science, Technology, Art and Society”, mainly in what concerns the area of “Science and Art”. She is currently supervising 5 PhD dissertations.
Her research includes Contemporary Philosophy, Aesthetics, Metaphysics, Science and Art, Epistemology, Ethics and Ecosophy. In what concerns “Science and Art” interdisciplinary field, she focuses her work on the concepts of Territory, Body, Ecosophy and Creation. In parallel, she develops a career as Art Curator, having completed, in 2016, a Postgraduation in Art Curation by the Faculty of Social and Human Sciences of the New University of Lisbon (FCSH – UNova Lisboa).