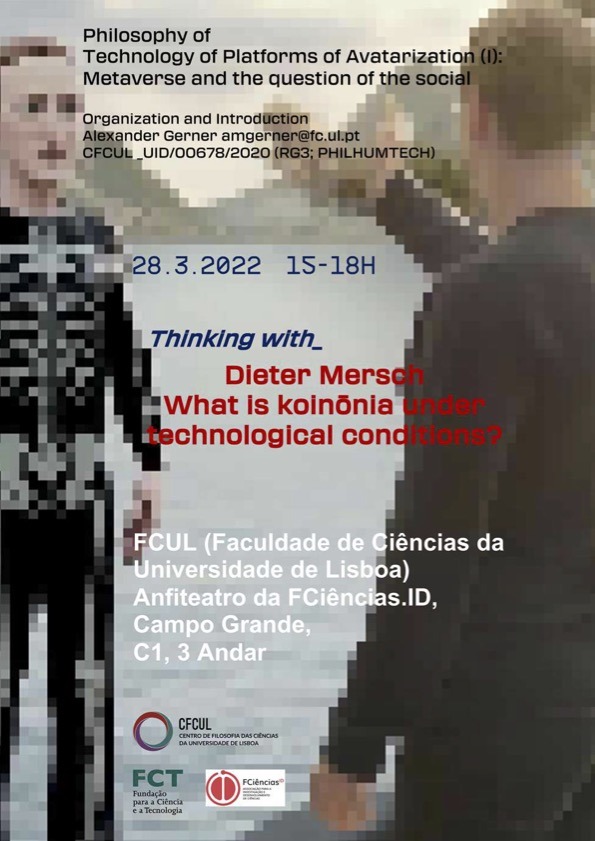 Abstract Over the past fifty years, the sociality of the social has been discussed within social sciences under the notion of what Aristotle called κοινωνία, or more exactly κοινωνία πολιτική (koinōnia politikē). As the koinōnia politikē determined the concept of politics in Antiquity, it should, however be remembered that the polis, as an organized polity, served first and foremost the formation of community, so that the political, the social, and ethics came together. Yet the literal meaning of the Greek word ‘koinōnia’ is the ‘association,’ the public, so that the expression addresses what is common to the community, what holds it together, as also Plato wrote in Politeia. In particular, it refers to the political organization and its social bonding. The question, the presentation will arise is, what this bonding could mean under conditions of social networks, the internet, and social media, especially by addressing the example of the project of ‘Metaverse’ and the ‘avatarization’ of meeting together. More specific: Since the constitution of sociality is based in central concepts, such as communication, trust, cohesion, reliability, justice and so on (which literally build the true koinonia), the question will be, how these concepts can be realized and continued under conditions of formal infrastructures that allow only for virtual practices of participation and exchange.

Nota biográfica – Dieter Mersch
Dieter Mersch is a philosopher, Prof. em. of the University of the Arts Zurich. Dieter Mersch studied mathematics and philosophy in Cologne, Bochum and Darmstadt. Between 2004-2013 he was Full Professor of Media Theory and head of the PhD Training Program Visibility and Visualisation: Thinking with Images; between 2013-2021 director of the Institute for Critical Theory at Zurich University of the Arts, Switzerland and Prof. for Aesthetic Theory. Recent publications: Ordo ab Chao / Order from Noise, Zürich / Berlin 2013, Epistemologies of Aesthetics, Zürich / Berlin 2015, Manifesto of Artistic Research. A Defense against its Advocates, Zürich / Berlin 2020 (together with Silvia Henke, Nicolaj van der Meulen, Thomas Strässle and Jörg Wiesel) and essays on Media-Philosophy, Art-Theory, Artistic Research, Image-theory, Musicology and Digital Criticism.

Sobre o workshop  “Philosophy of Technology of Platforms of Avatarization (I): Metaverse and the question of the social” – Alexander Gerner (CFCUL/GI3)
Fox-Harrol and Lim (2017) characterize the avatar dream and technological culture by the avatarization of humans – which is already being amplified by AI and other algorithmic rationalities – in two ways: by the technical and experimental and its consequences in the field of human sociality on avatarization platforms. Computational surrogates speak to us through textual descriptions in games or social media and virtual visual representations in virtual reality environments. The experiential dimension allows the transformation of virtual surrogate selves into immersive experiences beyond orthodox physical encounters. In this conception of the avatar dream, people use the computer as a chimera-building tool to invade and transform their self-image. The avatar dream machine produces surrogates and dramatically transforms any imaginary frame of experience, virtually, playing with whoever and whatever we want to be. This is how avatars can become part of a virtual identity. But the social dream of the ubiquitous AI intelligent avatars and the economic, social, political and religious platformed life becomes even more proof that we play with doubles to alter and program our sociality on social media platforms, more or less immersed and more or less virtual with technologies of the human on Meta-platforms.